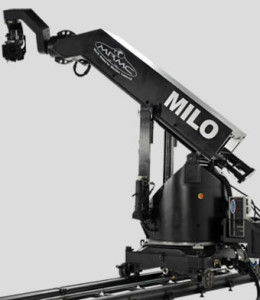 Developed by Mark Roberts Motion Control, Milo is for those who require the quality that studio systems can offer in a portable system. Milo is the worlds best portable system because of its rigidity and being fast enough for live action shooting. It can be ready to shoot within 35 minutes of arrival on the set. It has a huge range of options including different length arms and different types of track rail.

Some of the advantages of using a Milo include:

Milos are used daily in locations all over the world, for feature films, commercials and music promos. The rig is designed to be easy to move around a location or studio space with its intergrated floor wheels. It can be transported whole when travelling by road. For longer trips it is designed to be easily taken apart into 7 main pieces (excluding rails) by just 3 people. Re-assembly from flight cases is a very fast and simple process and once trained can be done by 3 people in well under an hour, to be ready with the first shot.

The Milo uses our Flair motion control software for all its functionality and Flair integrates with various 3D and CGI packages using a variety of file formats and methods. Exporting moves from the Milo to a CGI platform can often be done directly or using our MC Tools software or an FBX file format very simply and without fuss. Alternatively complex moves designed in CGI software such as Maya can be previzualized in our special CGI interface – IKTRIX – during pre-production or by the SFX/Post-production house and then be transfered directly to the Milo to execute on set or at a later date.

Although the arm of the Milo swings in an arc about the centre of the rig, straight line moves are achievable vertically, horizontally or in any direction, through the use of the “Target Tracking” feature in the computer software. For example, during a vertical straight line move, the track automatically compensates as the arm swings up to produce a perfectly straight lift.

The Milo’s geometry allows it to perform moves from ground level (or below) to a maximum height of 4.1 meters (13.5 ft.) with a minimum of image shake. The extending arm enables the system to be shortened for delicate close ups or lengthened for greater reach.

Note that the Milo Long Arm now gives a lens height of over 6 metres!