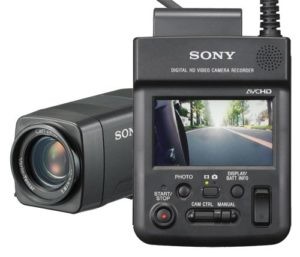 The HXR-MC1P uses a 1/5-inch “Exmor” CMOS sensor, which is also used in Sony professional camcorders and high-end D-SLR cameras. This achieves low noise thanks to multiple micro A/D (analogue to digital) converters.

Recording and playback are both possible via the control unit of the HXR-MC1P. You don’t need any external recorder/player.

The control unit has a 2.7-inch (16:9), 211,000-pixel LCD panel that uses ClearPhoto LCD plus, which enables you to instantly review the images captured by the camera. Furthermore, all menu settings can be accessed via this touch-screen LCD panel.

The control unit is also equipped with a recording button, zoom lever and manual control dial, which let you control the camera remotely while watching the images.

With the HXR-MC1P, it is easy to shoot in a way that is impossible with ordinary camcorders. No special equipment, such as an external monitor or remote control device, is required.

The control unit of the HXR-MC1P has connectors for both HDMI output and analogue video output. By using a commercially available HDMI/HD-SDI converter or an A/D converter, you can also make live relays or recordings using HD-SDI signals.

The HXR-MC1P can help you achieve unique and powerful images during live events, by mounting it close to the action – such as inside the goal during a football match or near the hands of a musician during a concert.

The HDMI and analogue video connector can output SD signals if the recording mode of the HXR-MC1P is set to SD.