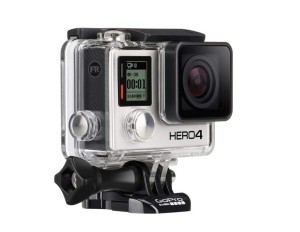 Active way of life is now just capture the action with the camera GoPro Hero 4 Black. The camera with a small weight and size is so portable that fix and forget the helmet of extreme disciplines, or the car body by means of special fasteners was not a problem. Action Camera GoPro Hero 4 Black is capable of recording digital movies in Ultra HD, as a result of shooting is possible to obtain high quality imprinted episode of intense adventure of life with high detail. An important role in the capture of the shooting range plays a three-dimensional viewing angle by changing the value of the environment can be placed in the frame longer than usual. Video Recording occurs on the high-speed memory card. Just Action Camera GoPro Hero 4 Black is able to work in photo mode, it is possible to capture a series of photos, night photography. Auto Low Light mode enables you to be distracted by the ongoing fascinating moments in life and forget about adjusting the camera when changing the degree of illumination when shooting. When the sun will not be in the sky, the night comes the most interesting, because a lot of hidden secret there is something in the environment, and the whole picture, you can still capture with high quality mode and Night Lapse Night Photo.

Whether you’re a fan of any sport, or when taking part themselves, can take action camera GoPro Hero 4 Black video to account for any errors that would share active achievements. The operator will often act as a subject on which the camera is mounted, the effect will enthrall the camera behind him. Direct Participant will even be a spectator, because he has the opportunity to observe the process from the inside and to empathize with the hero of the video. The camera accompanies extreme, achievements and setbacks, all will film and keep in a small and lightweight body, and still protected from moisture inside. The small size of the camera GoPro Hero Black 4, a number of additional fasteners allow secure in previously inaccessible locations, respectively, we get when shooting action camera GoPro Hero 4 Black and fresh perspectives. QuikCapture Mode GoPro Hero4 Black Action speed-camera draws a reaction, because when you press a button to instantly capture a unique moment. Remote control function greatly facilitate shooting dynamic scenes, it takes place with the help of the built-in Wi-Fi and bluetooth, you can connect to the free app GoPro App Smart Remote panel or remote control (optional).

High quality video captured action camera GoPro Hero 4 Black is still half of the success of the camera, because the camera has also a powerful audio system, which provides high quality recording crystal-clear sound and a built-in analog-to-digital converter helps to combine the camera with professional external microphones that support recording a three-dimensional stereo sound with improved performance.

Taking care of the viewer, because they are more than the characters, is available for use Protune mode, using it creates a professional-level content. Manual control of video footage and photographs by means of color correction, sharpness, exposure and many other parameters.

Built-in Wi-Fi and Bluetooth® for managing and viewing data

Now Protune ™ mode is available for photo and video.

The back cover with slots – Skeleton Backdoor